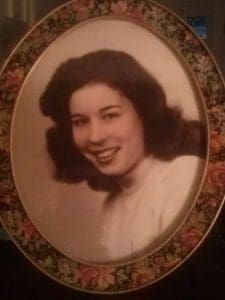 We are sad to share that Louis Dingler Smith passed away yesterday.  Louise was a regular attendee of the annual reunion, and it always felt like the reunion couldn’t start until the ladies from Mobile arrived. She will be missed. Our thoughts and prayers are with her children, Selma and Ed, and the entire family.

Born in Blountsville, Alabama, Louise was the third of four sisters born to Era Estelle “Belle” Whitaker Dingler and Edd Dingler. She grew up in Marion, Alabama, graduated from Perry County High School in 1942, and then Judson College in 1946 with a bachelor’s degree in Speech and English.

She married William Hobson Smith prior to his deployment to the South Pacific Theater with the U.S. Army in WWII. After the war, they both entered the University of Virginia where she pursued her master’s degree. The death of her father required that they return to Alabama where she entered the University of Alabama and received her master’s degree in English Literature.

Louise’s professional life began as a teacher at Cove Elementary School in Panama City, Florida. When she moved to Mobile in 1962, she taught English at Murphy High School. In 1965, she was one of the first teachers hired at the University of South Alabama and remained there until she retired in 1992. She loved and studied the Renaissance period and the Age of Enlightenment and traveled with USA’s British Studies Program as a student just for the love of learning.

More than anything, Louise was a true Southerner. However, while she was grounded in and steeped in Southern traditions, she was a progressive and forward-thinking woman. She was an advocate for equal rights for all, especially women, and was a part of a civil lawsuit challenging sex discrimination at the University of South Alabama in the 1980s. She never stopped seeking to improve herself and the world and, in the 1970s, she sought and was awarded one of only 100 grants offered nationwide to build one of two solar houses in Alabama which still stands today.

Having grown up during the Depression and knowing hard times, Louise used education and her natural curiosity to discover a life other than that offered by her immediate environment. She found and developed a great love of all things beautiful and particularly enjoyed gardening, art, entertaining, and travel.

Published in the Mobile Register and Baldwin County on Oct. 25, 2017