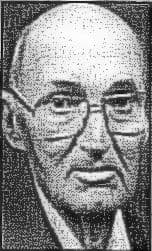 Beverly Palmer passed along a copy of the obituary for her uncle, William Ellot Dingler, who passed away in 2007. The obituary text is as follows:

He was born July 27, 1920, in Kirby, Ark., to William Issac Dingler and Rosa Thrash Dingler.  He was retired fro, Reynolds Metal where he worked as a crane operator. He was a veteran of the United States Navy and served his country in World War II.  He was a former Mason.

He is suvived by two daughters, Cathy Green and her husband Jim or Little Rock, Ark., Paula Morrison of Jonesboro, Ark.; one brother, L.B. Dingler and his wife Inez of Donaldson, Ark.; one sister, Pat Schales and her husband Henry of Donaldson, Ark.; four grandsons, Sean Morrison and his wife Tina of Paragould, Brad Morrison of Jonesboro, Zachary Green or Conway, Matthew Green of Little Rock; several nieces and nephews.  He was preceded in death by his wife Evelyn Dingler; his parents; and a brother, Royce Dingler.

Funeral services are scheduled for 2 p.m. Tuesday, April 24, 2007, in Atkinson Funeral Home Chapel with Rev. Rockey Poyner officiating.  Interment will be in Ouachita Cemetery.  Pallbearers will be his grandsons.  Visitation will be held Monday evening from 6-7:30 at the funeral home.  Arrangements are under the direction of Atkinson Funeral Home, Malvern, Ark.

Beverly also passed along that her mom, Pat Dingler Schales, always enjoys hearing any news about the Dinglers. Beverly and Pat have not had the opportunity to attend a reunion yet but hope to one day.